Aaron Cocking joined the IFM as Executive Vice President in September 2019 after serving as President & CEO of the Minnesota Association of Farm Mutual Insurance Companies since 2014.  He was promoted to IFM President & CEO in June 2020.

A native of Marshalltown, Iowa, Aaron graduated from the University of Northern Iowa in 2004 with a bachelor’s degree in Public Administration.

Aaron worked on U.S. Senator Norm Coleman’s staff before becoming Director of Legislative Assistants for the Minnesota State Senate.  He left government to work for the Republican Party of Minnesota as Research Director from 2009-2011.  He rejoined Senate Staff in January 2011 where he served as Committee Administrator for the Senate Commerce Committee until September 2012, when he joined the staff at MAFMIC as Director of Government Affairs.

Aaron and his wife Kristie live with their two children in Albertville, where Aaron serves on the City Council. 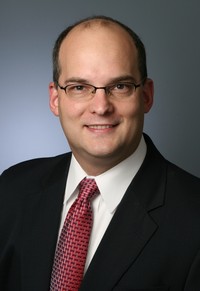 Mark Kulda is on his second stint with the Insurance Federation of Minnesota. From 1999-2002, he was Director of Communications at the IFM before being named Managing Editor at WCCO-TV in September of 2002. He rejoined the Federation in March of 2004, as Director of Public Affairs.

He was promoted to Vice President of Public Affairs in July 2006.

Mark has a Bachelor’s Degree in broadcast management from Park University in Kansas City and a Master’s Degree in public affairs reporting from the University of Illinois-Springfield.

Mark spent more than 12 years as an award-winning television reporter, weather anchor and news manager in seven television markets in the Midwest and Southwest, including at both KSTP-TV and WCCO-TV in the Twin Cities.  He now handles lobbying and media relations duties for the IFM.

Mark is an avid soccer fan.  He spent 19 seasons coaching teams including many of his children’s teams and he still plays in adult men’s leagues around the Twin Cities, where he also referees for both club and high school soccer.  He also enjoys collecting antique road maps.  Thanks to eBay he now has more than 7000 maps.

He and his wife Jan have two sons.  He also has two older daughters.